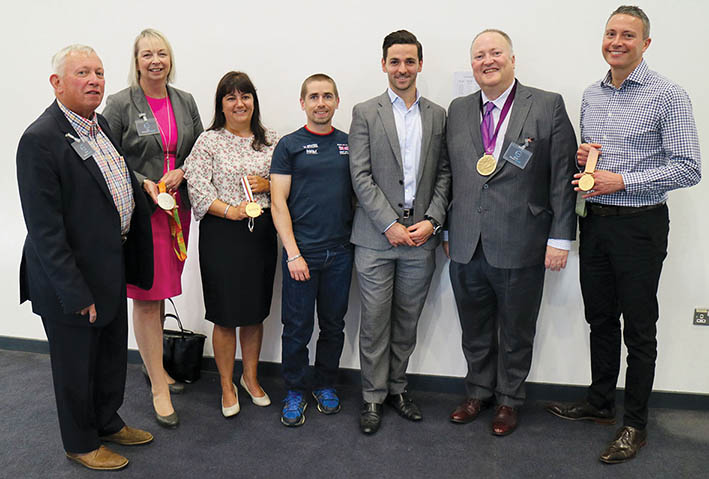 The end of September brought two great speakers to K-Club’s regular Salford networking event – Ben Peppi, head of sport services at JMW and leading Paralympian Cyclist Neil Fachie MBE. So, after the usual excellent breakfast courtesy of hosts AJ Bell Stadium, Ben Peppi took to the mike. Ben talked with passion for the sports industry and the importance of career transition of athletes to business. He began with conceptualising the pathway from professional athlete to retired athlete looking at their character traits, value and circumstances e.g. their reason for retirement, including injury.

First in the transition process, an athlete needs to establish their own inherent value to business. What will set them up for their retirement? This task involves increased self-awareness and understanding of their own self-worth – beyond being on the pitch or court or course. Questions to consider are: Who am I? What’s my social and personal identity? What’s my purpose?

Ben explained that when in their career prime, athletes are often micro-managed by clubs, agents, managers, parents and so on and that the retiring individual must also transition to greater self-reliance – with the correct support for business and wellbeing. There is often an understandable fear of having a lack of transferable skills. Upon retiring their identity of performance is lost and, is further compounded through the further loss of teammates, environment and routine. This can lead to a harsh reality and one or more of the ‘Big 5’: Debt, Divorce, Depression, Drugs and Drink.

There is a bit of a myth, he said, that athletes simply migrate to coaching or media. Ben believes there are many more opportunities to explore and this is where his expertise and platform come in to ‘play’. For example, an athlete’s personal network (including sponsors, CEOs and senior execs) can open doors for business – this ‘little black book’ being a majorly overlooked and under-developed strategy in the UK. Furthermore, corporates and SMEs can benefit from collaboration through the personal traits and skills of the athlete: tenacity, teamwork, resilience, ambition, hyper-competitive, manageable and being highly committed. They have leadership skills and can motivate others. This sports mentality is what is needed for successful business – 110% dedication. There are a number of ways businesses can benefit and use sports stars to capitalise on these traits – from PR to media and sponsorship, event hosting, strategising sales and marketing. This applies for both business-to-consumer and, business-to-business. Brands and businesses benefit commercially with continued growth of digital and social campaigns, with the uptake of contracted marketing rights of a star and ambassador agreements. Similarly, there is the rising value of sporting properties that are aligned with businesses. There are increasingly nuanced arrangements with variable ways to engage sports stars with fees, equity and structured rewards making it more affordable for business too. Ben rounded up by looking to the future learning from the USA where American stars are demonstrating success in a variety of creative ways. We have various athletes with many skills across many different sports able to fit businesses including and beyond sports, technology, health and nutrition.

Next to speak was Neil Fachie MBE. As a Paralympian Neil is visually impaired and rides on tandem bicycle. He is a double commonwealth champion, double world record holder and ten times world champion. Neil began by referring back to his own dramatic memories of being in the moment of the Olympic games. Where his hard work, discipline and focus was levelled with the doubting ‘what if?’ questions in his mind and the judging presence of staring onlookers and TV cameras. He remarked that athletes’ careers are ‘defined by moments’. Bodies are pushed to the limit and minds to the edge of resilience. With numerous gold and silver medals and having set world records and then returned to break them, Neil had much to share on achieving potential and coping with both success and perceived failures. Reminiscing on the times when he won silver and not gold, he shared that he had felt ‘like a failure’ and discussed his own personal low points where after much torment, he had the revelation that he also had no career or income after sport. After some soul-searching he returned to cycling but also to set up his own business – LNF coaching – where he could share his insights on self-talk, mantras and being focused.

Through these techniques (e.g. mantras and self-talk) athletes maintain being ‘in the moment’ and in the flow of their best technique. He offered the audience the ‘rule of three’ – where mantras that use 3 words are more memorable and effective (e.g. “Just Do It”, Nike). Neil shared his own winning mantras “earn your stripes” as an example (referring to the striped design of the winning jersey). Each time, “earn your stripes” would bring his focus back to his goal. In doing so, he self-improved, made the team again and raced his dream race in the velodrome. He became world champion and did indeed “earn his stripes”. He went on to win another 2 gold medals and to break his own world record.

Neil concluded by showing his medals to the audience and explained that each carried not only a story of struggle of what he had to go through to win, but that each carried a winning mantra. He likened this to business and encouraged the audience to form their own mantras – and apply them (as an athlete would) in the moment, to their own goals with clear focus, to win.