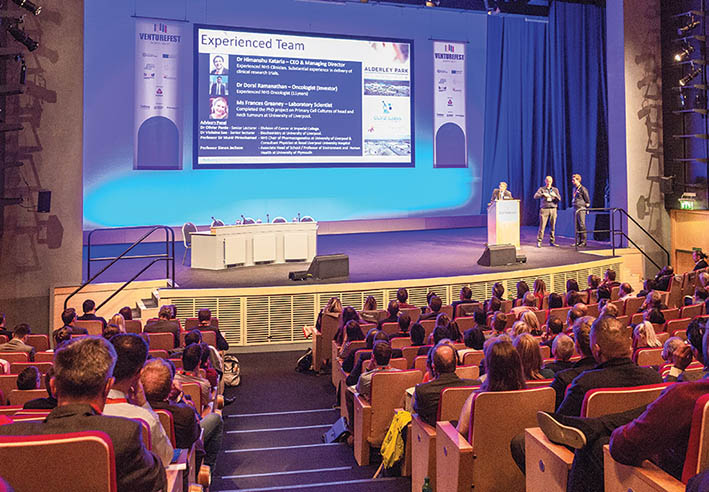 The event, the biggest in five years, was held at Manchester Central in September and was organised by GC Business Growth Hub, part of The Growth Company. Host Priya Lakhani OBE was joined by speakers including Richard Noble OBE and Jenny Tooth OBE in promoting the value of innovation. Amongst the prize winners of the day Reach and Rescue scooped overall winner in ‘Innovation Showcase’ while Telcom took the ‘Audience Award’.

Around a thousand people attended this year’s Venturefest North West 2018, providing further evidence of the region’s place as a leading centre for innovation. Former Altrincham Grammar School pupil Priya Lakhani OBE hosted the event and highlighted in her opening remarks that start-ups, scale-ups and SMEs are the businesses best-placed to innovate. The founder of CENTURY Tech went on to say that innovation is a mindset, and that in her opinion, businesses can fail because they aren’t committed to solving customer issues. For Priya, this is where innovation comes in, as it disrupts services and products, altering them to meet the needs of the market. She then concluded her remarks by stating that agility, rethinking every aspect of the business and embedding creativity in every area of the company to spur innovation is the way forward.

Priya’s speech was followed by a presentation by Jenny Tooth OBE, CEO of UK Business Angels Association. Jenny outlined her background as an angel investor and explained to businesses looking for investment how the angel investment market worked. She then highlighted that 65% of angel investment activity took place in London and the South East, and that she was working closely with partners like the Growth Company to help nurture a vibrant angel investment offer in the North West to help address the gap.

Mike Anderson, CEO of Padoq, and founder of digital agency Nothing But Epic, was the final speaker of the morning session. He told delegates that winning the Innovation Showcase competition at Venturefest 2016 was key to the success of the Padoq concept. Mike then shared a number of valuable business lessons he had learned over the last two years and announced that the Padoq product had officially gone live that morning to coincide with Venturefest.

At the centre of this year’s event was the annual Innovation Showcase Competition, which was open to start-up and scale-up businesses from across the region. Twelve companies had been shortlisted from more than 170 entries across four categories – Product Innovation, Service Innovation, Digital Innovation and Innovative Established Business – in front of this year’s audience, in the hope of securing a business support package worth thousands of pounds and national visibility. Following an impressive and informative set of pitches that demonstrated the outstanding level of innovation across a range of sectors in the region, the Innovation Showcase awards were won by the following: Product Innovation (Reach and Rescue Ltd), Service Innovation (Urban Chain Ltd), Digital Innovation (Corporation Pop), Innovative Established Business (Whitham Mills Engineering Ltd).

Reach and Rescue were declared the Overall Winner of the Innovation Showcase Competition, while Telcom won the Audience Award voted by the hundreds in attendance. Jo Taylor, business owner at Reach and Rescue, said: “We are absolutely delighted to have won the overall award and the Product Innovation category. It shows how our company’s innovation can save lives, and I’d like to congratulate every individual person who has been involved in the product.” Richard Jeffery, director of GC Business Growth Hub, added: “It’s fantastic to see record numbers of people coming to this year’s Venturefest. The atmosphere around Manchester Central today has been buzzing. In addition to the enlightening speeches, we’ve also witnessed some very impressive pitches as part of the Innovation Showcase, and I’m delighted for all the winners.

“Our advice clinics, breakout sessions and expert panels have also been of the highest quality, and the whole event has epitomised the creativity, innovation and ambition that define our region. Venturefest North West symbolises what GC Business Growth Hub is all about; bringing businesses together, sharing expertise and stimulating economic growth through innovation and collaboration.”

Other major speakers included Richard Noble OBE, Project Director of Bloodhound SSC which is set to make an attempt on the world land speed record next year. Richard talked about how Britain has a culture that seems to temper innovation, which he referred to as “a British ceiling”. He went on to say we need more ‘can do’ mindset like the Americans, and highlighted how he and his team had been engaging with schools through a major STEM educational programme. He also warned against the threat of IP and innovation being rapidly copied by other territories.

The final presentation was given by Richard Topliss, NatWest’s Northern Managing Director and Chair of The Growth Company. He revealed that recent research suggests that businesses in the North West are the most likely not to know where to go for support, and that the work of the North West’s Business Growth Hubs is crucial to ensure the region stays competitive.