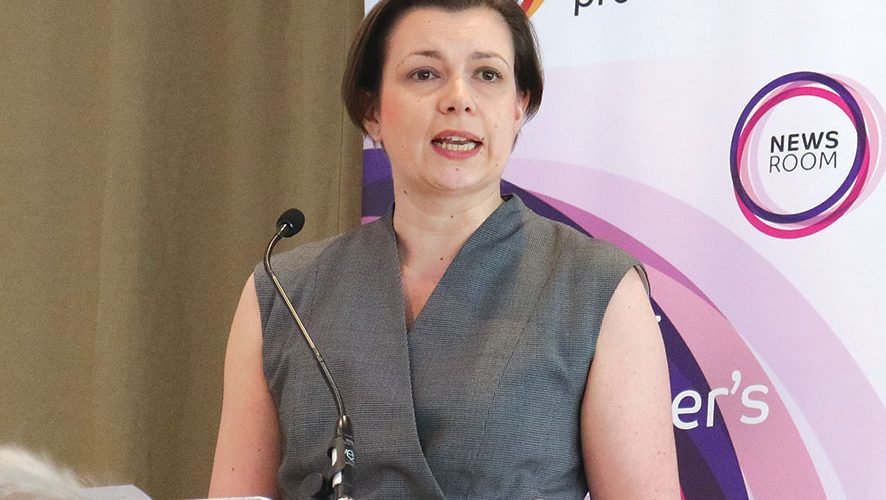 The end of July saw a change of chair for pro-manchester – the largest business development organisation in the Northwest. Taking place at the Lowry Hotel in Salford, this was a chance for members to network, enjoy a fabulous lunch, thank outgoing Chair Alistair Cree as well as welcoming new Chair Jenn Hazlehurst. Jenn both summed up recent activity with pro-manchester and outlined the coming year’s intentions for the organisation. She started with a brief introduction of her own background:

“I’m an audit partner with EY and have always been based in the Northwest, growing up in Cheshire, with Manchester and Liverpool as my ‘local’ cities. I’ve been working with listed and private businesses across the North West, particularly in the power and utilities sector, for 20 years. I first got involved with pro-manchester well over a decade ago, initially through networking events and then helping to establish the Energy group – or Green Economy group as it is now called – and as a founding member I served on the committee for around six years. I joined the Board in 2015, becoming deputy Vice Chair in 2017 and am honoured to be taking up the role of Chair this year.

“For me it is all about collaboration.

“So, I’m going to talk about why I believe collaboration is so important particularly for a business network and membership organisation such as ours, and outline some of the areas pro-manchester will be working on over the next 12 months which all share the common theme of the power of collaboration. This includes developing our strong relationships locally with each other, across the region and Nationally.

“Firstly, collaboration enables us to continue to develop our already strong local relationships. pro-manchester has well-established links with the GM Combined Authority, MIDAS, City UK and the office of the metro mayor and this year there will be more of the same on that agenda. Our chief executive Sam Booth  represents pro-manchester on a number of boards including the Greater Manchester Organisational Representatives Board where she sits alongside the Growth Company, Greater Manchester Chamber, IOD, FSB and more. As well as this, Sam sits on the Faculty of Business and Law’s Advisory Board at Manchester Metropolitan University, which aims to oversee the faculty and ensure its activities are in line with the Greater Manchester business community. More recently Sam has become the Regional Deputy Chair of TheCityUK, where she helps to engage on a regional level on behalf of individuals in the financial and professional services industries. These voluntary appointments Sam has taken up create strong ties with business organisations in Greater Manchester, allowing pro-manchester to steer their events programme and membership to represent what it is the business community wants.

“Secondly, collaboration provides the opportunity to build strong links with other regions, especially across the Northwest. I work across Manchester and Liverpool and champion both cities, and I’m encouraged to see that they are increasingly taking a more joined-up approach. This relatively new collaborative approach has been fostered and helped by the relationship that exists between our respective city mayors – Andy Burnham and Steve Rotherham. They have jointly lobbied central government and rail companies over the delivery of rail services across the Northwest – from last year’s timetable change chaos, to the failure to introduce promised commuter services to towns, and now the risk that rail companies will fail to meet their own deadline to phase out ageing Pacer trains by the end of 2019.

“Working together, and building on each city’s strengths, has to be the best way forward. To affect real change it will take all of us, speaking with one voice, to local and central government. The Northern Powerhouse Partnership (NPP) was established almost three years ago with an agenda of rebalancing the UK economy to ensure a more even distribution of government spend on areas such as education and infrastructure. Whatever your views around HS2, I’m sure you’ll agree that Northern Power Rail needs to happen. Increased capacity, faster trains and more frequent links across our Northern towns and cities would not only help our quality of life but also increase business efficiency and open up greater access to talent across the North.

“But the Northern Powerhouse agenda is about more than just rail links. NPP has identified four prime economic capabilities, which are pan-Northern, highly productive, and internationally competitive. These are: Advanced Manufacturing, Energy, Innovation, and Digital. And to give a couple of examples of their activities:

“On digital – EY ran a series of innovation sprints for the NPP across the North last year to identify enablers to encourage faster growth in the digital sector across the region.

“In energy – The NPP is working on a report to be published in the next quarter which will focus on what the Northern Energy Industrial Strategy should look like – how we can create new industries and maximise what we already have here, with a focus on carbon capture and storage, nuclear, and hydrogen.

“All four of the economic capabilities outlined by NPP are underpinned by the capabilities within the Financial and Professional Services sector, as well as infrastructure and education. So this is an agenda we can all, as professionals, get involved with – sharing our expertise, knowledge and connections to help drive the North’s economy and generate greater prosperity for all. Once again, it’s all about the power of our collective networks.

“Collaboration across the cities’ local government bodies is important but it is also crucial across wider networks such as ours. Ultimately that is what pro-manchester is all about – collaborating, connecting and building networks.

“I’m really pleased to see that the third element of connecting and collaborating is about building Manchester’s National and International profile. And we have a lot to be proud of. Manchester has the largest regional financial, professional and business services industry outside of London, employing more than 283,000 people and accounting for 20% of the local economy. Over the last 10 years, Manchester’s financial, professional and business services sector has doubled in size, with our legal sector expanding faster than any other regional city and at more than twice the rate of central London, with some 13% of total office take-up in Manchester involving law firms.

“It is the only UK city outside of the capital with all elements of the sub-sectors represented at scale, providing depth and diversity across a range of disciplines that makes Manchester a high quality, low risk investment location. pro-manchester works closely with MIDAS and welcomes new businesses into the region, providing them with a ready-made network to slip into, making that transition from outsider to insider so much easier. We’re in touch with over 100,000 businesses across the North West, which makes pro-manchester the natural gateway to business
in our region. In a report into foreign direct investment published last month, Manchester has again been ranked as the best performing UK city outside of London, with 37 FDI projects locating in 2018. However, the relatively strong performance of London and the South East still suggests that attempts to rebalance the UK geographically may be harder to realise, and this year’s data showed a definite shift of investment to larger cities as foreign investors look to place ‘safe bets’ amid a general climate of political and economic uncertainty. Manchester city centre was home to 53% of all projects locating in the North West in 2018 and it was the only North West location to make the Top 10 for FDI. At the end of July we againosted the annual visit from the Lord Mayor of the City of London. This was a real opportunity to build relationships with the Capital and showcase Manchester as a city, and more broadly Greater Manchester and the North West as a whole.

“The final element of collaboration that I’d like to highlight is working with each other. As I said at the start, pro-manchester is an organisation built around enabling professionals to connect and network. Sam and the team are focused on ensuring that we continue to run the right sort of events for our members.

“Our sector group programme continues to support the local industrial strategy and local GM strategy ambitions with events such as key lunches, specifically around Property, Transport and Healthcare innovation.

“We are launching our first Green Tech Symposium in October, in support of Greater Manchester’s ambitions to be the world’s first zero carbon region by 2038. That huge ambition brings with it exciting opportunities for innovation, upskilling and economic growth so the Symposium will welcome a wide range of companies developing innovative new technologies to lower emissions, reduce our carbon footprint and improve our environment. We will also hear from professional advisors, policymakers and training providers to understand how everyone can benefit from these developments. Meanwhile, our conference in March will be again focusing on Trailblazing tech and innovation in the region. We all share the same collective ambition of seeing our businesses grow and thrive, creating skilled employment and driving the success of Manchester and the North West region.

“Collaborating: between us, between businesses and across cities and the region is the key to driving success. It is what makes Manchester a great place to live, work, and do business.”