Search our articles
You are here: News » Archived News » Challenges and opportunities for an ageing Manchester

Challenges and opportunities for an ageing Manchester

In March, Greater Manchester became the UK’s first age-friendly city region as recognised by the World Health Organization. Mayor Andy Burnham has released GM’s Age Friendly Strategy and is working with all sectors, including healthcare, transport, housing and sport, to implement it. There are 10 million people aged 65 or over in the UK at present, and it is expected that this will rise to 15.5 million in 20 years’ time, and to around 19 million by 2050. As Greater Manchester becomes the first age-friendly city region in the UK, as recognised by the World Health Organisation, Mayor Andy Burnham launched an age-friendly strategy and joined GreaterSport to celebrate the securing of £1m funding from Sport England to encourage older people to be more physically and socially active.

To mark the achievement and to see how public bodies and the private sector are adapting, pro-manchester gathered some of Manchester’s most in-the-know professionals to discuss the challenges and opportunities for an ageing Manchester. GreaterSport’s Development Officer for Older Adults, Beth Mitchell, who discussed their new strategy with Mayor Andy Burnham at length: “The program has already shown great signs of longevity way after our funding ends. Traditionally these programs have been created by a bunch of people sat in boardrooms, but by getting out into the boroughs of Greater Manchester and doing focus groups, gaining insight and conducting surveys, we believe we have increased the potential of it being sustainable in communities post-project.” Beth also discussed the Greater Manchester’s new ‘Beelines’ project, an innovative new plan to create a city-region-wide cycling and walking network made up of more than 1,000 miles of routes, including 75 miles of Dutch-style segregated bike lanes. The accessibility of this project, Beth believes, will mean that more people will use it. “There is no cost for people to use it, they don’t even need a bike. I think if these routes make people safer, it will encourage more walking,” she commented.

What more needs to be done for older people in the workplace?
Jon Cheetham, GM Business Connect says: “There was a huge ageism issue in workplace culture, however, there’s definitely a change happening now – not because of political correctness, but because of necessity bourne out of a real skills shortage across the region. This only seems the case within the white collar rather than blue collar workforce though which is a problem. I would say a 50-year-old now is not perceived the same way a 50-year-old was perceived 20 years ago. We see people who have made a life choice not to retire at 60 or 65 because they want to carry on as it’s a vocation and they enjoy their work. I meet “older” entrepreneurs a lot in my line of work – these people are staying fitter, healthier and more focused far older because of their engagement in their business roles. Businesses are reaping the benefits of a far more effective older demographic and I really think there are lots of positives to having an ageing workforce.”

Alison Loveday, Partner at Kennedy’s, believes the best way for businesses to adapt is by changing the language they are using: “I’ve done a lot of corporate disputes, particularly with age discrimination claims directed at older people. A lot of these claims start with language used which has a huge impact on how people feel. This could be applied in other areas quite easily. For example, the new apprenticeship schemes that are aimed at older people could do to be renamed, as it has certain connotations about it. There is a huge amount of people in workplaces with good skills in terms of dealing with people but their professional skills aren’t necessarily needed anymore, so can we upskill them in other areas?”

This question sparked a great debate among our panel. Andrew Spencer, ICZ Director at University of Salford, shared insights on a fascinating new project, where 75 researchers are looking into healthy ageing at Salford’s Dementia Institute. The main aim of this project is to promote the importance of focusing on your environment, social life and general health and wellbeing in order to age more comfortably. One thing they are looking into here is whether being more active or working longer will benefit us as we age.

Andrew had positive views for Greater Manchester, after his time working in both Scotland and Hertfordshire: “In terms of talking to people and their desire or will to make a change in their community to help older people, I would say it’s pretty strong in Manchester. I lived in Scotland when it got its devolution and it creates a sense that it’s small enough that you’re able to be part of something. Manchester’s devolution makes things much more cohesive. There is a much more real appetite for change and making a difference here compared to places I have previously lived.” 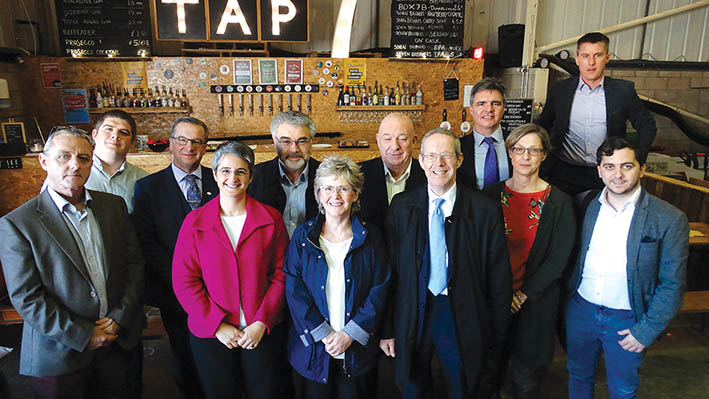 A well-organised round table in a brewery!

Salford’s Seven Bro7hers’ Brewery was the unlikely, if not fascinating venue for an FSB roundtable event in November,...